The Architectural scenario in Kerala by Sujith.G.S

The architectural scene in Kerala is going through a very interesting and critical phase. Following the amazingly refined traditional wooden architectural period, the architectural scene in the state meandered meaninglessly following the collapse of the princely state system under the administration of the British Empire. The architectural intervention of the Britishers resulted in an eclectic mix of public architecture which manifested most prominently in the Indo-Saracenic style of architecture. This, however, was limited only to a few sporadic public buildings and did not extend into the residential typologies. Following independence and subsequently, the formation of the new state, there was a period when the architecture was influenced by the modernist movement happening across the world. This was further augmented by the easier access to cement and concrete technology, resulting in the creation of a lot of concrete boxes. The waves of the modern architectural vocabulary of the post-independence architectural experiments of Corbusier in Chandigarh and of other practitioners in the rest of the country gradually began to wash over the shores of Kerala and resulted in their translation into the residential architecture of the state, but was limited mostly to the residences of the rich. A lot of fanciful and interesting designs evolved during this period, but soon fizzled out. Their appeal could not be transformed into a mass movement which affected the overall built environment, one in which the professional architect designed only a fraction of the building stock.

It was also a time when the nascent profession of architecture began to take its initial steps in the state, struggling to establish a meaningful presence in the local architectural scenario. This struggle continued well into the start of the new millennium, aided by a slew of factors – the lack of visionary and strong willed initial practitioners, absence of visionary clients, failure to strike a chord with the masses, absence of conceptual clarity and a unifying ideology. If in places like Ahmedabad and Chandigarh, there was a clear direction forward vis-a-vis, defining a modern architectural vocabulary for a new India, surprisingly, in Kerala, this was completely missing. The zeal for a new direction and language was missing – both among the practitioners and also among the academic circles, where the quality of discourse was average at the best. Gradually our environment started to get clogged by meaningless concrete boxes without character, which weren't suited at all to our context and climate.

It was also the time when Laurie Baker made his mark in the built environment with his unique designs. The inherent beauty and logic of his designs caught the imagination of the common man, who went in for the ‘Baker model’ homes, which were unique, sustainable and cost effective. That it took a man like Baker, a supposed foreigner, to understand and frame the issues and to work towards evolving an architecture which addressed these concerns, also tells us of the lack of local architects with genuine  empathy and understanding. Thus, Baker created a remarkable body of work which were timeless, which are relevant even today.

Following a phase of gradual consolidation, the architectural profession in the state is now at a crossroad. We are presently in a confused state of existence – unable to make up our minds whether to offer continuity – off imagery, of form, of materials, of spatial planning and functionality...or, to tangentially deviate into uncharted territories and untrodden paths to define a new vocabulary, where the risk of committing errors are greater, where the chance of being proven wrong are much higher...
This presently manifests in a language which borrows heavily from both the past and the futuristic globalised forms, often creating hybrids which are as confused as the viewer is of their state of being. It has also resulted in architects following an imagery of globalisation without necessarily having the conceptual depth and understanding, often ending up as impoverished imitations.

However, out of this merging of old and new, sometimes works of real value arise, works which are grounded in the present, taking cues from the past, while looking forward to the future. Albeit rare, such spaces offers hope – hope that the architectural profession is not done and dusted yet – that there can be creative solutions for the issues we face today, that we as professionals can rise up above mere commercial considerations.

A positive offshoot has been the improvement in the quality of the academic discourse, where there is an infusion of younger blood and ideas. The stagnation and depreciation in the standards of education in the state has been gradually arrested.  Yet, only the downward spiral has been arrested as of now – there is a lot to be done to grow up and evolve. This realisation that it is high time that the standards of academic discourse has to rise has brought in a gradual change of attitudes, a change of focus, which will only benefit the young minds growing through this system. It is again a crucial period for the architectural education scenario in the state, with plenty of new private colleges being granted permission to start their intakes for the architecture course. A lot of these colleges lack the basic infrastructure and lack educators who are of good calibre, often settling for mediocrity just to get the course up and running. The fact that this situation will adversely impact the minds of the children learning there does not seem to matter for a lot of such institutions. The unforeseen fact is that in a few years, there will be an abundance of half baked professionals graduating from such institutions flooding the architectural scene - graduates who are not at all fit for practising architecture, ultimately dragging the profession even lower. This situation must be addressed urgently by all concerned so that there is a dialogue on the way forward.

Another malady plaguing the architectural scenario in the state is the lack of quality research done, both academically as well as by the professionals in the field. This aversion to research has to be overcome for meaningful solutions to emerge. In this age, research is crucial, for the professors as well as the practitioners and is one way to bridge the chasm between academics and practice.

Thus, architecture in Kerala is in a heightened state of flux, where the opportunity to shape a better built environment clearly exists and is one of the mandates that lies before the profession. This opportunity must be delicately addressed to frame the issues, to open up more meaningful exchanges and to ultimately evolve a relevant architecture vocabulary that addresses the needs and aspirations of the people and to guide them forward as stake holders in shaping up a better future environment.
Posted by Sujith.G.S at 5/21/2014 2 comments

Residence in Kerala - Renovation of own residence atThiruvananthapuram, Kerala by Ar.Sujith.G.S

The existing house consisted of two levels on a gently sloping site, where one entered from the top level through a small semi-open verandah. A small living room and 3 bedrooms were arranged in the upper level, with the dining and kitchen on the lower level to accommodate the slope of the site. The existing design was a simple one, made interesting by the utilisation of the slope of the site. However, the major functional and aesthetic disadvantage of the existing house was its small central living room. The room was itself small and its functionality was totally reduced by the placement off the 3 bedrooms around it. Thus, 3 separate doorways branched off from this living room. In addition, the entry door as well as the staircase opening was again positioned into this small room. Thus, there were circulation paths all around, ultimately diminishing the usable space inside the room.

Naturally, one of the major requirements of the renovation was that the poor design of the living room be addressed. In the end, this was done by sacrificing one of the smaller bedrooms directly behind the living room. The single common wall connecting this bedroom and the living room was demolished with the result that it totally opened up the whole space. In addition, one of the doors to the masterbed was shifted so that it increased the privacy and also for improving the efficiency of the circulation spaces. The window on the leftside of the entrance was removed and a landing alcove created to access the stairs leading to the top floor. This further opened up the space, bringing in another dimension to the spatial volume.

An additional floor was created on the top by adding a multifunctional space which doubled up as an informal lounge and a study. The overriding concerns were to create a space which was open, well ventilated and yet, one which was private. Thus, the vocabulary evolved consisted of floor to ceiling openings, large overhangs and ample greenery. The space was a simple one, a linear volume which opened out onto the landscaped terrace garden on one end and onto the lush greenery of the treetops on the other end, creating a corridor through which wind traversed continuously all day long. The small terrace garden elevates the overall design, creating a well proportioned space which is very private, all the screening provided by the coconuts and the ficus tree canopies. This landscaped garden with the river pebble bedding and green palms help in anchoring the space.  A bedroom space and toilet make up the rest of the space on this floor.

There is an inclination towards the earthy in the form and texture of the materials used – a combination of exposed bricks and pristine white walls, offset by the earthy colour and texture of the matt floor tiles. This is enhanced by the large openings all around, designed in simple steel joinery, creating a seamless transition between the inside and outside. The wardrobes in the bedroom are finished in exposed mdf and glass. The furnitures in cane along with the vibrant hued fabrics spice up the space adding more life. The rustic theme is carried forward in the accessories like the terracotta urns, the traditional old hanging lamp etc. The framed black and white photographs on the walls, taken by the architect himself, add a lot of character to the space. 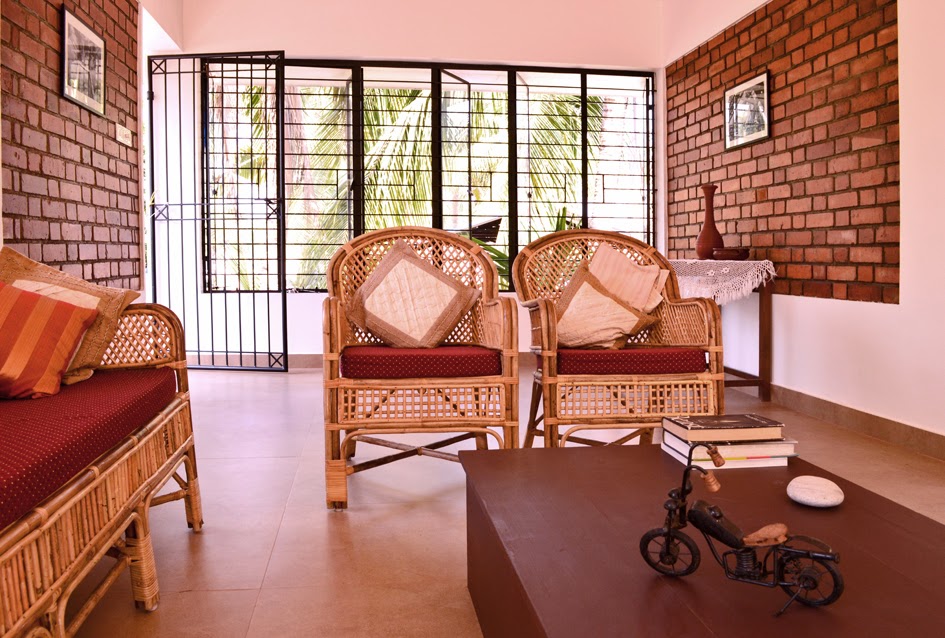 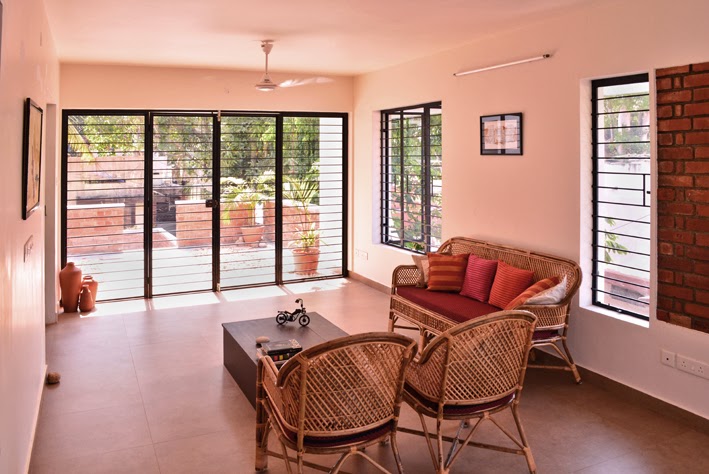 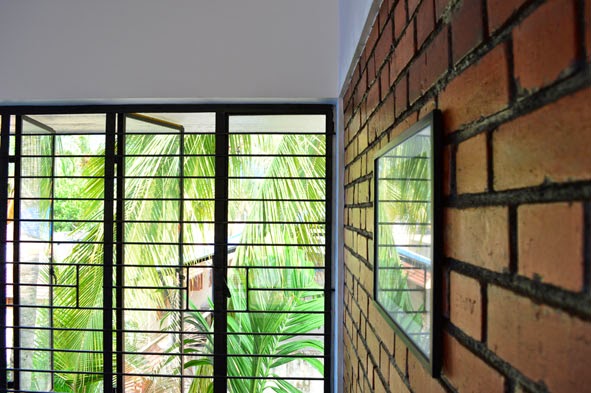 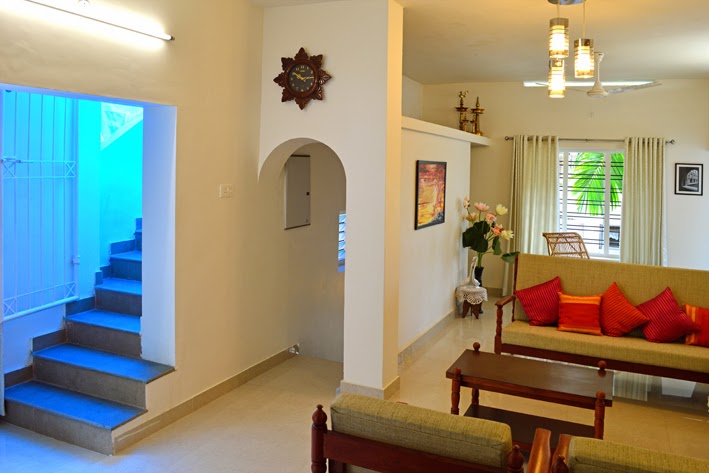 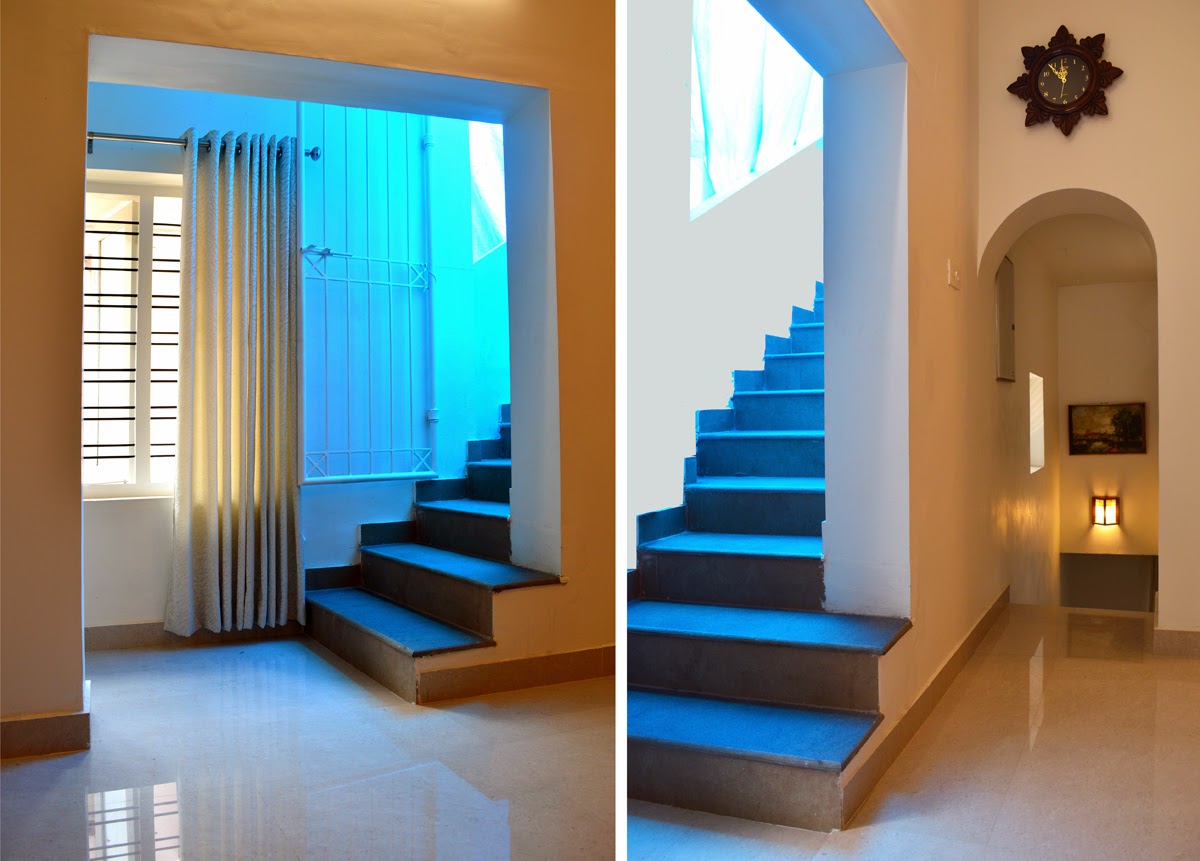 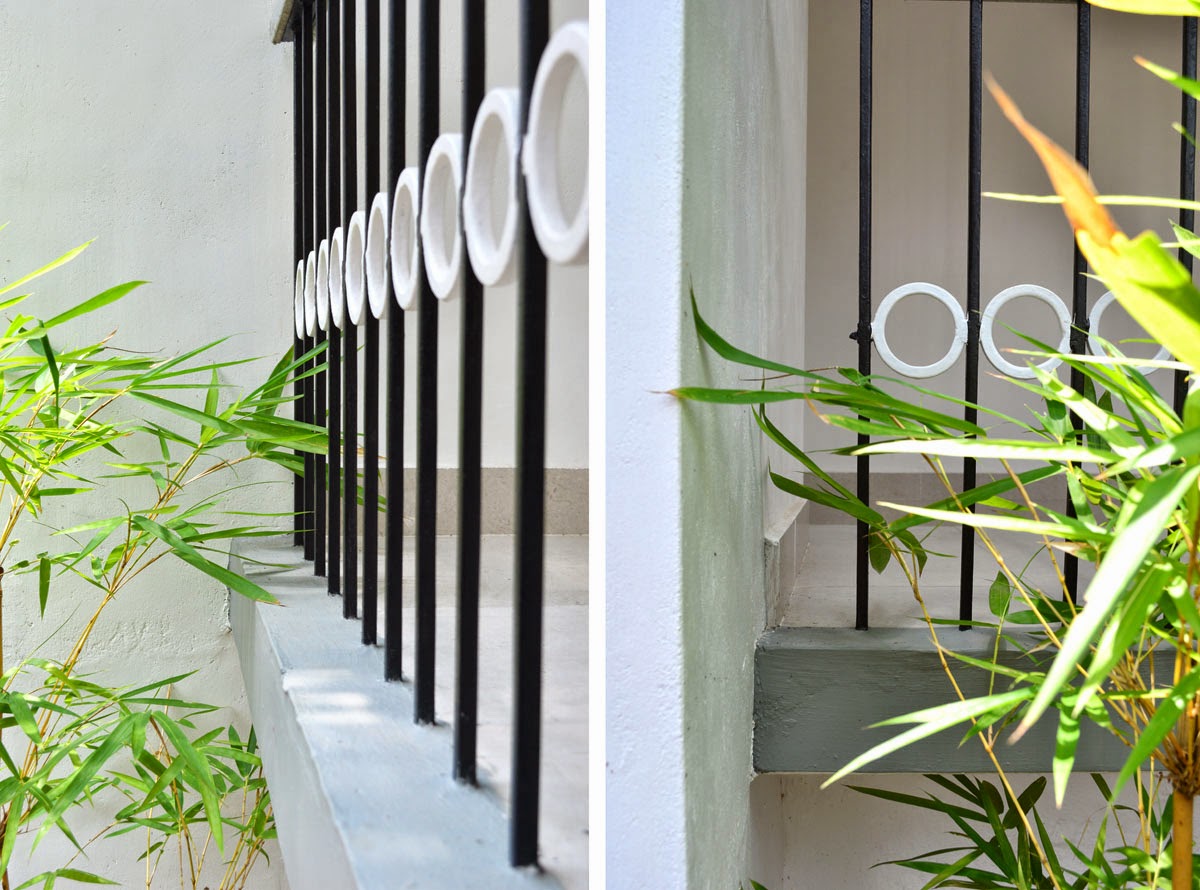 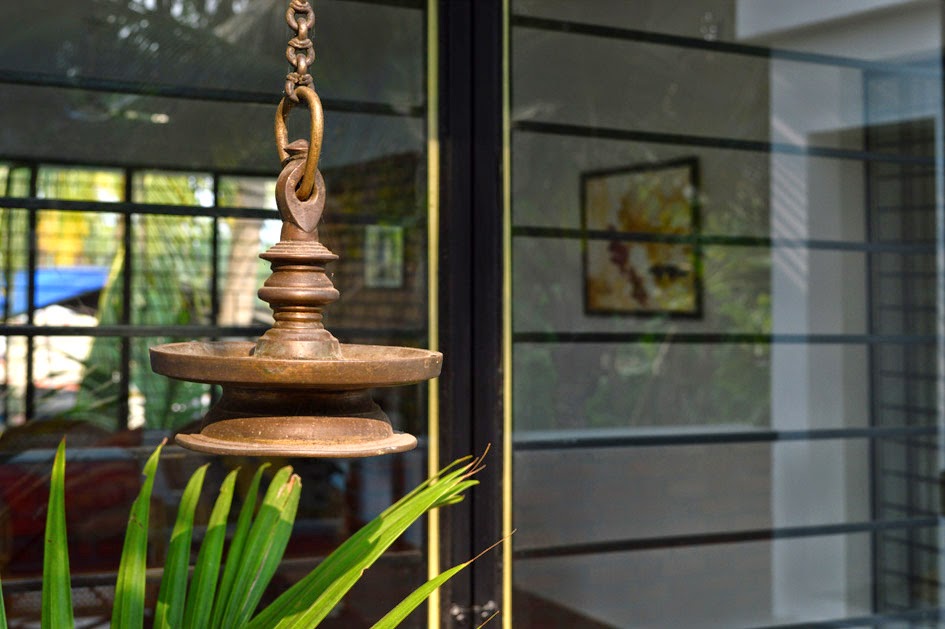 PREPARATION OF AN ARCHITECTURE PORTFOLIO

I have been receiving a lot of requests from students for details on HOW TO PREPARE A GOOD ARCHITECTURE PORTFOLIO.

Taking this into consideration, I have compiled a detailed booklet on how to create a great portfolio, which will guide you through the detailed process, including identification of materials, ideal layouts, graphics and rendering styles, text placements, photographing your models....an exhaustive list which will guide you step by step.

You can now avail this great resource for creating your best portfolio, which is essential in this highly competitive age - either to get into good firms for internships, applying for your masters or for getting that coveted job.

Get full access to 'How to prepare an Architecture Portfolio' !!!

So go ahead and mail me at ar.sujithgs@gmail.com to order today!