The Connaught place or the Connaught Circus, though not designed by Lutyens is part of Lutyen’s Delhi and was conceived as the Central Business District of the new city. It was also constructed after the inauguration of New Delhi in 1931 and was completed only in 1933. The design of the space was started by W.H.Nicholls, the Chief architect to the Government of India and after he left India in 1917, the design was completed by Robert Tor Russell, who was the chief architect of the PWD, and was named after the Duke of Connaught. The Connaught Place or CP, as it is fondly called, houses some of the headquarters of several Indian firms and is one of the largest financial, commercial & business centres in Delhi.


The space is conceived of as 2 concentric circles, creating the Inner Circle, the Middle Circle & the Outer Circle and seven radial roads.
The inner circle of CP is bounded by a two storeyed building ring all around, with a colonnaded passage at the ground level. This is home to all kinds of branded shops, eateries and restaurants, and is a favourite location for the young urbanites to hang around. The space is always bustling with couples walking around through the circular colonnaded space, window shopping or just simply walking around looking at people. There are also the street vendors selling their curios, handicrafts and eatables. The double height passage with the massive columns on one side creates a strong axis of movement, yet at the same time creating a comfortable space due to its semi-open nature. A major disorienting factor in this space is that all around the inner ring, the architecture of the double storeyed buildings with their colonnaded passages is so monotonous that one cannot orient oneself in the space. It is difficult to identify which part of the circle one is in and people often end up walking around the entire circle to find a place or to meet a friend. The only landmark which helps in giving a sense of direction is the LIC building designed by Charles Correa, which stands as a distant landmark with its red sandstone facade. 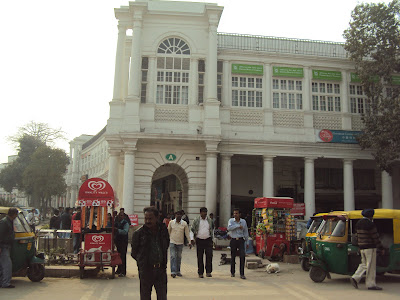 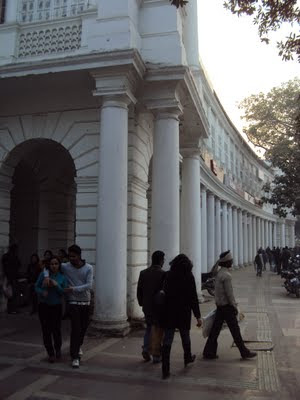 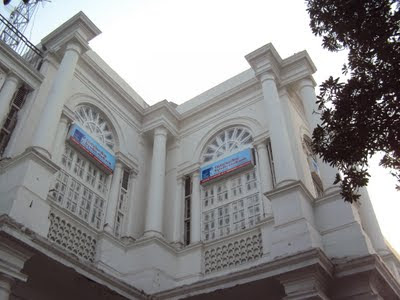 The central park is frequented by youngsters, couples & even families, who enjoy the evenings sitting out on the lawns. The space below this is converted into a large underground market called the Pallika Bazaar, where you find everything from clothes, to electronic items to softwares and is a bustling places always filled with people.
On one side of the outer circle stands the imposing structure of the LIC building. Architect Charles Correa has designed this monumental structure. The language is that of red Agra sandstone cladding on the external walls with a glass facade and a massive space frame structure to define the entrance space. There is a large flight of steps on the front side, further emphasising the monumental scale of the building.
There is a quaint little market just behind the LIC building, on the Janpath, which is exclusively for garments. There are lines of shops on either side selling T-shirts, ladieswear etc, with a wide central space through which the people move and haggle with the vendors.
﻿ ﻿ 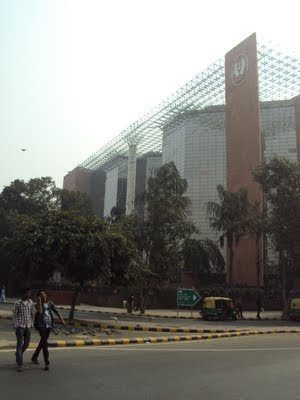 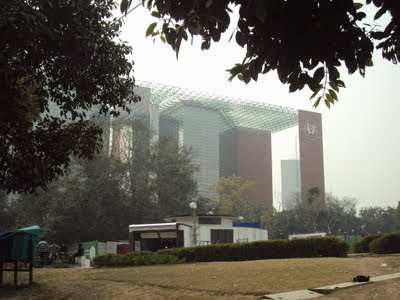