Fatepur Sikri is situated on an extension of the upper Vindhyan ranges, on the bank of a large natural lake which has mostly dried up, on a ridge which is composed of red sandstone formations. The great emperor Akbar created a grand city, the first major town planning exercise by the Mughals, and shifted his residence & court from Agra to Sikri in 1572. The main reason for shifting is said to be due to the presence of Sufi saint Salim Chisti residing in Sikri. This was one of the most productive & formative period of Akbar's reign, during which practically all his main philosophies and institutions such as the 'Ibadat Khanah', 'Din-I-Ilahi', 'Jhakora darshan' and the policy of liberal patronage to indegenous arts and literatures were founded, for all of which Fatepur Sikri was the setting.
﻿
﻿

The city is comprised of 3 main complexes which were laid out as terraces in accordance with the sloping ridge. The Mosque complex was sited at the highest level and comprised of the Buland Darwaza, the Jama Masjid & the tomb of Sheikh Salim Chisti. The Royal complex was situated at a lower level and housed the Palace for the queen (known as Jodh Bai’s palace), Mariam’s house, Raja Birbal’s house & the Stables (though some sources credit the stables as having been spaces for the servants and attendant maids). The Public complex is at the lowest level and consists of the magnificent Pachisi court, the Panch Mahal, the Diwan-i-Khas, the Diwan-i-Am and the Anup Talao. All the buildings are oriented in the north-south axis, following the direction of the ridge.
The entire complex is a very calculated composition of perfection, dominated by a play of linear axises and changing vistas. The open spaces are contained perfectly by the built volumes without any ‘leaking’ of spaces. It is as if everything is forseen & calculated perfectly – every vista, every sight line, every volume and massing...all worked out beautifully. The spaces are monumental in scale overall, with the built spaces acting as magnets and point of references due to their anthropometric scale of elements. The overall result is that the whole composition is very comfortable for people, you feel part of the space, yet, the element of monumentality is always there to overwhelm your senses.
There is a beautiful play of levels which is normally not found in Mughal architecture. The topography of the site, which is situated on a ridge, has been used to maximum effect, creating sunken courts and subtle changes in levels which are used to emphasise the architecture.


The first structure in the Royal complex situated in the second level is the Rani’s palace, called as the Jodh Bai’s palace. This complex is the principal Imperial Harem of Akbar and has been wrongly ascribed to Jodh Bai who has nothing to do with Sikri and belonged to Raniwas or Zenani-Dyodhi. It consists of a large open quadrangle which is lined all around with single storeyed rooms, with double storeyed blocks at the centres and corners, to create an interesting play of volumes. The entrance is through the central block on the eastern side. The interesting thing with the entrance is that it does not open directly to the interior but follows a Z-shaped passage on the inside of the gateway structure. This was probably done to create a more private space in the inside for the women, shielded away from the exterior.
﻿
﻿﻿

﻿
﻿
On the west, the central block contains a small shrine, which is supported by richly decorated pillars. There are niches in this space, possibly for keeping images of deities. There are a lot of Hindu motifs used in this structure, which hints that the occupant was possibly a Hindu lady. On the north & the south side, the central blocks have a sloping gabled roofed structure on the top (which is very unlike any of the preceding Mughal architecture), which is finished with azure-blue glazed tiles. This structure is set back from the edge of the parapet, with 2 square chhatri with triangular domed roofs on either corner. There is an open terrace enclosed within these structures, which forms a very cosy space overlooking the open central courtyard. One can just imagine the occupants sitting in the Chhatris in the evenings, enjoying the setting sun, looking down on the activities in the open space below, while a gentle breeze blows through. The courtyard is compact, spaces well defined with a very humane scale. The transition from glaring light to shade to semi-dark to dark is one which creates a very interesting sensory perception, delineating the transition from public to semi-public to private space. Although the composition is extremely formal, the play of volumes helps in reducing the strict formality and gives the space a very comfortable serene ambience. 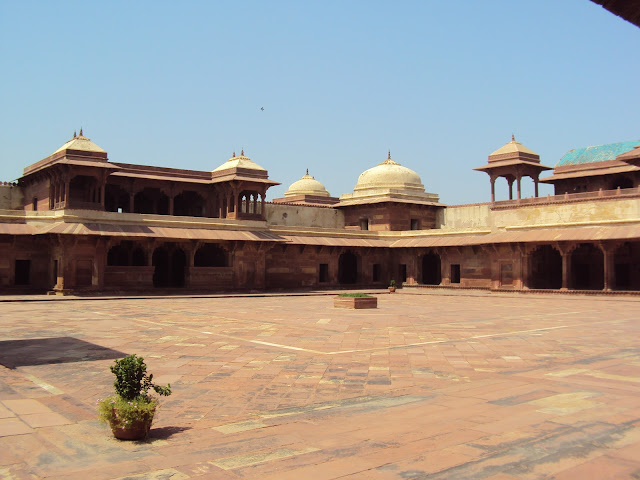 ﻿
﻿
﻿
﻿
As one moves from out of the palace and further towards the north, on the central axis of the courtyard is the Mariam’s house. This residential building is said to have been embellished with beautiful paintings and was also referred to as ‘Sunahara Makan’. The entire building is raised up on a plinth which serves to give prominence to the structure. There are 4 main rooms on the ground level and has a staircase which leads up to the flat roof. There is a single rectangular open pavilion on the top, which was used for sleeping purposes during the summer nights.
﻿
﻿﻿
﻿﻿
﻿﻿On the central axis of the Mariam’s house, towards the West, through a colonnaded frame lies Raja Birbal’s house. There is a sense of anticipation as one moves forward through the space, along the northern exterior double height walls of the Jaodh Bai’s palace. The view is revealed gradually as one crosses the colonnaded frame. The Birbal’s house is again situated on a plinth and consists of a double storeyed structure. The structure is opaque with solid walls on the ground level punctuated with 2 arched openings on either side. On closer inspection, one finds that these walls are exquisitevely carved showing the finesse of the craftsmen. There are 2 domed chambers on the upper storey, with domes finished in light yellow sandstone, which act as a pleasant contrast with the red sandstone walls. These chambers too are solid with a small projecting balcony on the centre and lend a solidity to the entire structure which is in sharp contrast to the overall lightness present in other residential buildings of the complex.
To the south of Birbal’s house is an open courtyard, bounded on 3 sides by a colonnaded verandah space. The functionality of this is however contested with one version saying that it was used as stables for camels and horses and another version saying that these spaces housed the various attendant maids and servants. It is slightly improbable to think that the stables will be located so close to Raja Birbal’s house, unless of course, Birbal was a great admirer of animal smells and sounds...
﻿
﻿
Posted by Sujith.G.S at 9/29/2011