The Public complex is situated at a slightly lower level than the Royal complex and houses the Panch Mahal, the Diwan-I-Khas, the Anup Talao, the Diwan-I-Am, the Pachisi court and a few anciliary structures. It is a large sprawling open expanse of red sandstone, bounded by various structures. It is almost as if the red sandstone floor plane is in perpetual contest with the blue sky as to who is more monumental, more awe inspiring, more grand... The buildings form focal points as well as points for physical reference in this expansive courtyard, providing a sharp relief to the monumental backdrops. All these buildings were raised from 1572 to 1585. They were all built in red sandstone in the trabeate beam and post order, composed of pillars, ornamental arches, brackets and chajjas, jharokas and chhatris. Some buildings display elements of indigenous architecture, creating a composite style which is a true reflection on the heterodox leanings of Emperor Akbar. 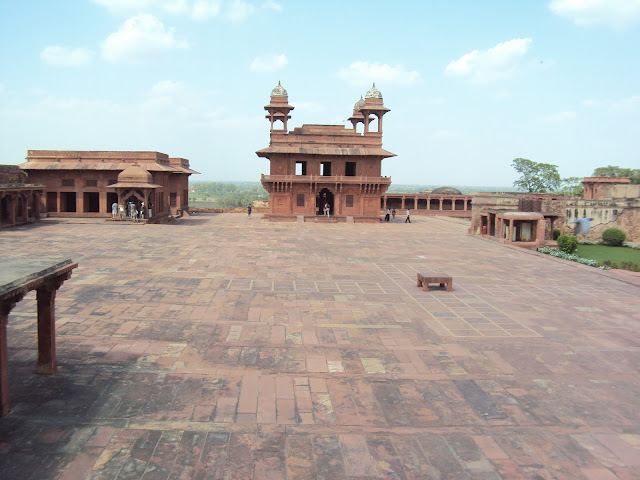 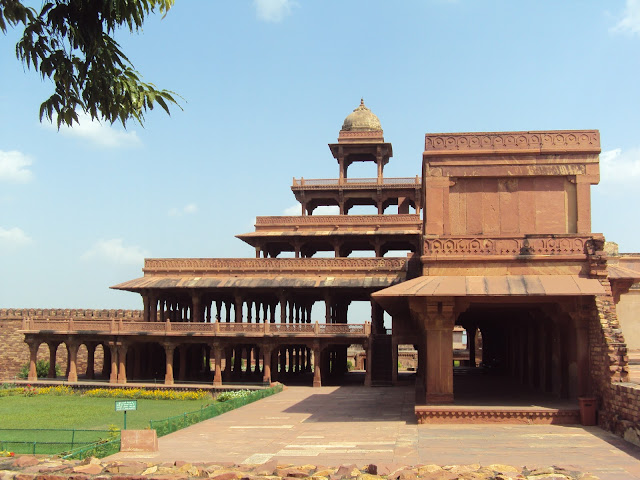 The Panch Mahal is an outstanding structure. It has an air of lightness about it. It consists of five levels of open colonnades, each stepping back from the one below, to finally culminate in a small pavilion on top of the fifth level. The open colonnades and stepped back terraces impart a light feel to this tall building. The view from the pavilion on the very top must be breathtaking, as the land falls away behind to the distant plains. It also gives a vantage point to observe the entire Public complex as well as most parts of the Royal complex.
At the centre of the Public complex is the Pachisi court. Here, the grids for the Pachisi game (something similar to chess) is inlaid into the red sandstone flooring and forms a life-size scaled element. 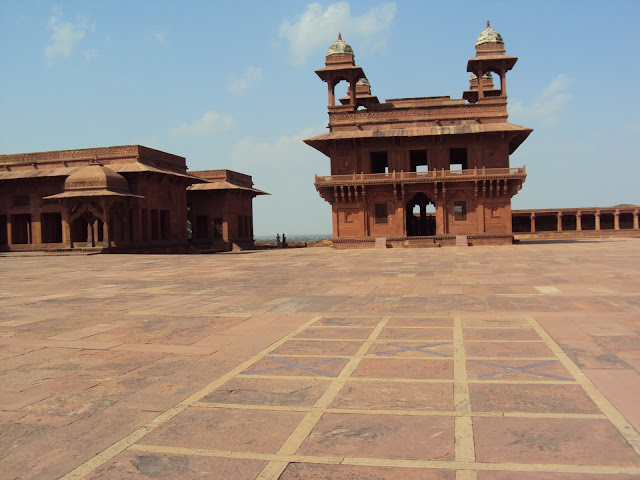 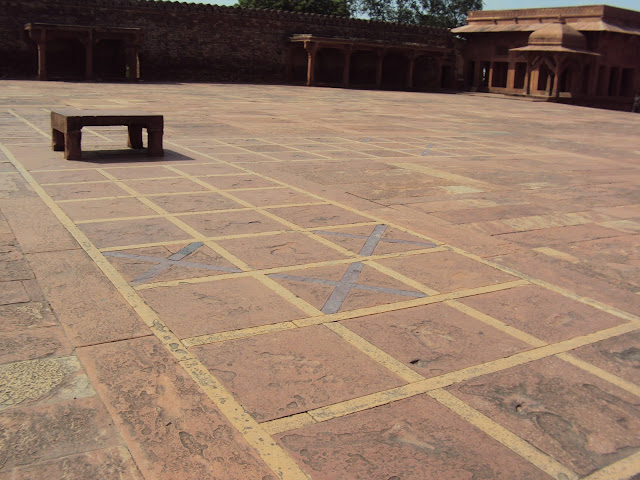 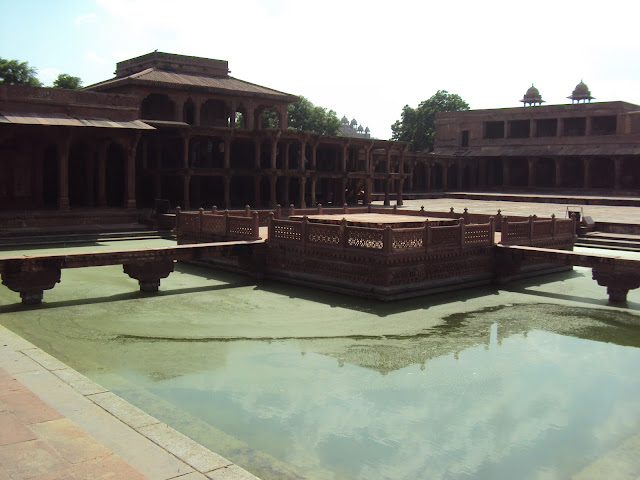 The Anup Talao is a cute little pond in a corner of the vast expanse of the Public complex. It is sunken in the ground with steps all around and in the centre is a small platform with jaali screen balustrades on which musical performances were held. This is accessed through four narrow bridge walkways. One can just imagine Tansen sitting in the middle of this beautiful pond, rendering soul touching music to the audience sitting all around on the steps, while the sun slowly goes down and the nightlights come to life. The cool breeze blowing across the stone paved expanse of the courtyard welcomes the dark night. The beauty of Anup Talab is that it is very personal. The scale and design is so personal as to make it a very comfortable space.
The Diwan-I-Khas has always held a fascinating curiosity. This structure in the north of the massive complex, appears double storeyed from the outside, with central openings on all four sides on either floor. Yet, on the inside, it is a single large space, double height with a vaulted roof. The remarkable feature in this space is the central column with a profusely bracketed capital. There is a small circular seating space on the top of this column which is accessed by four narrow balustraded passages radiating to the corners of the chamber. The exact function of this structure still remains a mystery and has been variously attributed as a space for religious discourses, as a space for private audiences or even a space meant for weighing ceremonies. 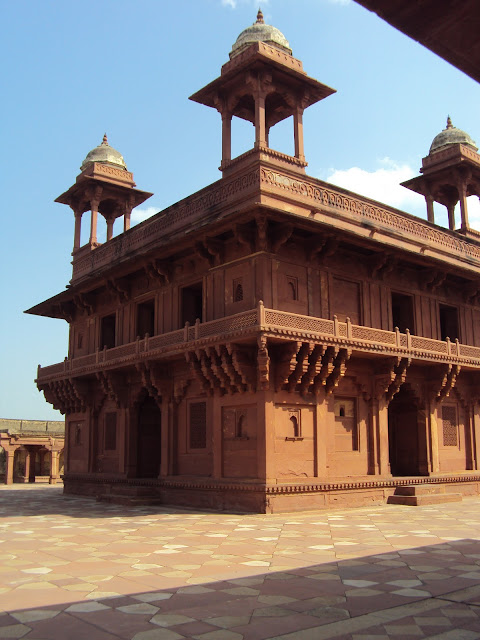 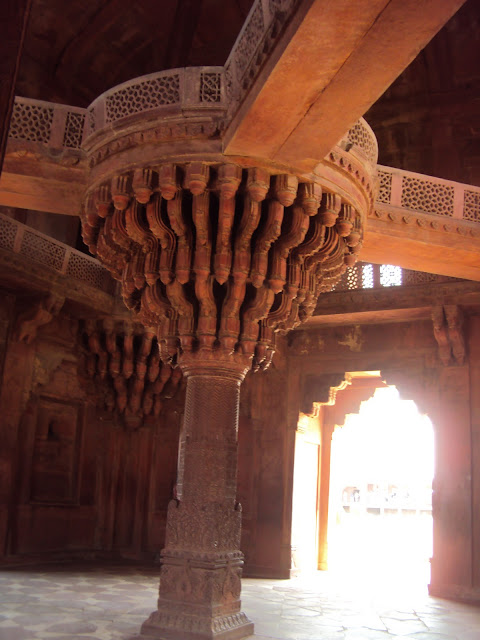 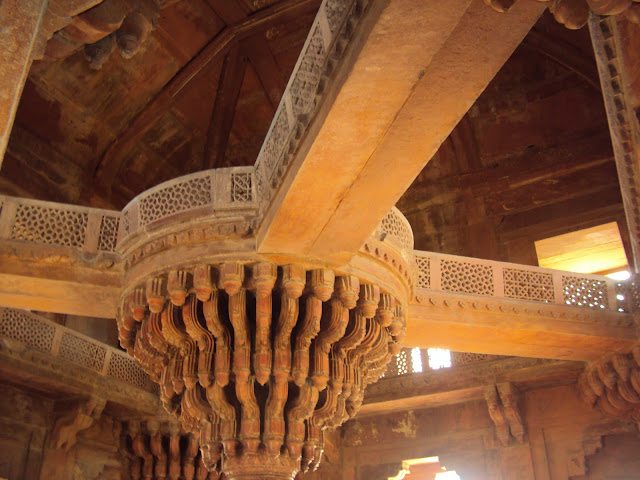 The Diwan-I-Khas is the space for the common public. It is a large open courtyard with a colonnaded verandah all around with deep recessed cloisters. In the western side is a space which was used by Akbar to hear the grievances and petitions of the common public. Akbar heard petitions and dispensed justice here sternly and impartially but without harshness or ill will.
After Akbar shifted to the Punjab in 1585, owing to political reasons, Fatepur Sikri was practically deserted. There are stories which even tell that this monumental city fell into ruins as the water ran out. However, it is a bit hard to think that the planners and builders of the city, who were clearly master designers and craftsmen, would overlook something as basic as inadequate water reserves.
Posted by Sujith.G.S at 10/11/2011