In 1943, Wright was asked to design a museum in New York city to house the vast collection of paintings amassed by Solomon R Guggenheim. Wright had always been fascinated with the spiral and tried to incorporate in his designs. Finally, he got the chance of a lifetime to use the spiral in the design for the Guggenheim, an opportunity to design a museum in the heart of New York. He came up with a design which is totally unorthodox – out of the box. A design which really stood out of the existing urban fabric, one which made the Metropolitan Museum building across the street look like a ‘protestant barn’ in Wright’s words. This was one of the main reasons for the success of the design. All the surrounding buildings were the ‘orthodox’ standard ones, which made the Guggenheim stand out in the street and highlighted it.
﻿
﻿ ﻿﻿﻿
﻿
﻿  However, the project soon turned to be one of the most difficult ones of Wright’s career. He had to battle for over 13 years to get his design to be built – he had to convince Guggenheim of the cost overruns, the zoning board refused to give permission to his unorthodox design...Yet he prevailed.


Finally, in 1956, work started on the building. The interiors were to be one continuous ramp where all the works were to be displayed. The visitors were to start at the top; which was reached by an elevator, and work their way down, taking in the exhibits on the wall, with natural light from above which was constantly changing lighting up the works. Wright was trying to create a synthesis between architecture and art in a way no one had ever done before. The Guggenheim in essence became a precedent for future works of a lot of architects – one in which the architecture was equally important as the art on display. Wright’s genius was in his ability to satisfy the functional requirements and yet at the same time design spaces which really grab you, which elevates the experience of spaces to a spiritual experience.
﻿ 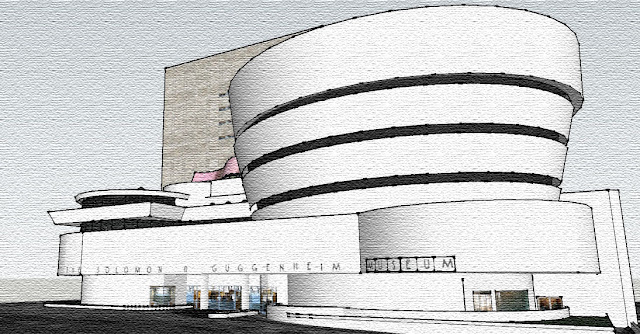