Rammed earth is one of the most common methods of earth construction practised worldwide. The basic process consists of mixing the earth with water to get a homogenous plastic mix, which is then poured into a formwork for the wall and is rammed and compacted. The ramming is done traditional using hand with a wooden or metal ramrod but modern pneumatic rammers are also present. Due to the ramming, the density increases and also the compressive strength and the water resistance. The life of rammed earth walls is usually long and they can carry heavy floor and roof slabs, as evident from the many still standing ancient structures around the world. 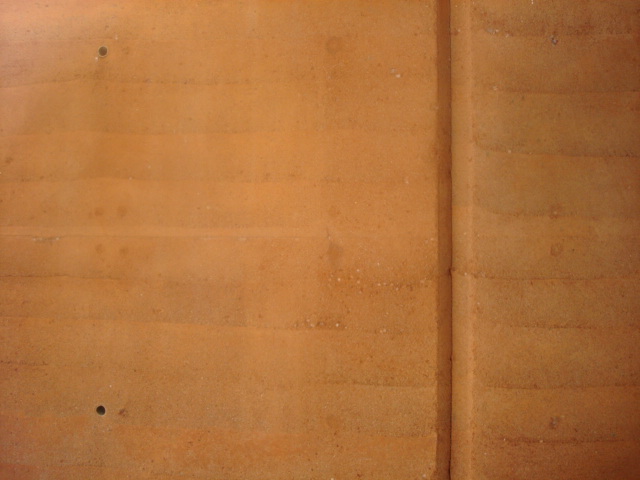 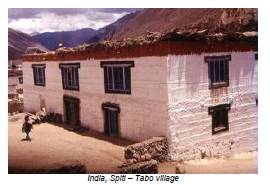 Ideally, the soil used for rammed earth construction should be sandy or gravelly.  The soil should be of uniform composition and should be sieved properly to remove unnecessary lumps. Sometimes stabilisers are added to the soil, which vary from lime, pig’s urine or even the milk of cacti. Modern stabilisers like lime and cement are also used nowadays. Mixing cement with the soil mixture can also increase the structure’s load bearing capacity, but is to be used only in clay-poor mixtures.
The most common type of formwork used for the construction of a wall is the horizontal type. Sometimes vertical formworks are also used. The horizontal formwork consists of 2 wooden planks of wood held together firmly by means of metal ties or bolts. The humid soil is then poured into the forms to get a course of around 12-15cm thickness. The soil is then first rammed along the sides of the panels and the central portion of the wall is rammed.  Once this course is completed, similarly the other courses are also done in the same way. The formwork is immediately removed and shifted sideways in the case of the horizontal technique and repeated until the whole plan is completed. The two planks are then raised up and a second course of rammed earth is repeated over the first and it goes on till the whole wall is completed. It is best to follow a bonding pattern as used in brickwork, so that the vertical joints between one rammed section and the next are not vertically one above the other. Otherwise, these vertical joints can later turn into one large vertical crack.
One of the benefits of rammed earth is its excellent thermal mass. Rammed earth walls are termite resistant, fireproof and ultimately bio-degradable. The rammed earth structures have low embodied energy and generate very little waste. 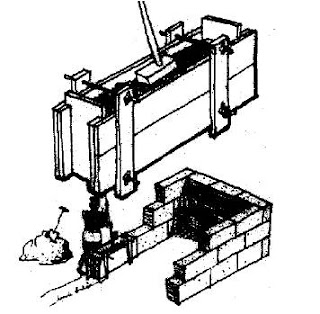 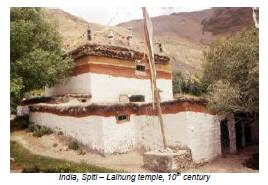 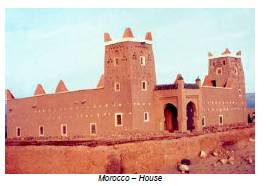