In 1911, the British government in India decided to shift their capital from Calcutta to Delhi, for ensuring better administrative control over the country. It also had the additional benefit that Delhi was near to Shimla, where the Britishers could retreat during the hot summer months. Thus was born the idea for New Delhi.
The underlying concept in the design of the city of New Delhi was to create a Monumental, grand city space which would inspire awe in the minds of the colonial citizens and which would be symbolic of the supremacy of the British rule and culture – a Monumental City.
To create the massive structures which were to form the new capital, British architect Sir Edwin Lutyens was appointed to design the magnificent new capital. He along with fellow architect Mr.Herbert Baker designed most of the structures that form the present capital of New Delhi. The major focus was to be the long axis along the Raisina Hill known as the King's Way, presently called Rajpath, with the India Gate on one side and the magnificent Viceroy’s house on the other end. The Viceroy’s house has been converted into the Presidential palace or the Rashtrapathi Bhavan in post-independence India. Today, the Rajpath has become the symbol of the modern India, with the yearly Repulic day parade through this stretch highlighting some of the progress made in various fields and also the military strength.
Along with this is the Janpath, which crosses the Rajpath at a rightangle, connecting Rajesh Pilot Marg with the Connaught Place. The other important focus of the plan of New Delhi was a hexagonal pattern which linked governmental, commercial & recreational activities with the residential areas.


The Rajpath is a 2.5km stretch which forms a strong linear axis with strong focuses on either end. One either side of the Rashtrapathi Bhavan are the two Secretariat buildings- the North & the South block, which houses government offices at present. The Rashtrapathi Bhavan along with the North & the South blocks are one of Lutyen’s & Baker’s memorable achievements, in terms of architectural design and scale. The architecture is a synthesis of British Imperialism & Indian elements, with Lutyens & Baker drawing inspiration from Buddhist religious complexes on one hand, and Mughal architecture on the other. There are traces of classical style, with columns and colonnaded verandahs. These are interspersed with chatris, jaalis and chajjas borrowed from the traditional Indian architecture. The composition is symmetrical and formal with a strong central axis and the Rashtrapathi Bhavan as the focus, on top of the Raisina Hill. There is an interesting story regarding the positioning of the Rashtrapathi Bhavan on top of the Raisina Hill. At present, only the top of the dome of the Rashtrapathi Bhavan is vaguely visible from below. While Lutyens intended it to be the primary focus of the composition, Baker was successful in pushing the location of the building back, leading to a lack of clear visibility and also to animosity between the two men. 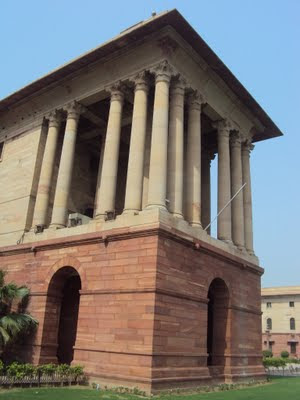 The North & the South blocks are mirror images of each other, designed by Baker. These linear buildings have a large central recessed space which leads one inside the central entrance into the space below the massive dome. The facade is plain, composed of sandstone clad walls with red sandstone being used on the ground floor walls and yellow sandstone on the upper floors. The red sandstone portion tends to anchor the whole building on a solid base. There are protruding arms on either sides with massive colonnaded porticos to create a very formal composition.

The Rashtrapati Bhavan on the end of the axis is the undoubted focus of the composition, with the large black stone clad dome above the front entrance portico creating a strong visual composition. The whole composition is designed around a massive square with many open areas and courtyards within, with separate wings for the Viceroy and Guests. It is massive in size, being larger than the Palace of Versailles, with 340 rooms, 227 columns & 2.4 kilometres of corridors, set in a 330 acre estate.
A major portion of the construction of the buildings was done by the contractor Mr.Shoba Singh, who is the father of author Khushwant Singh. 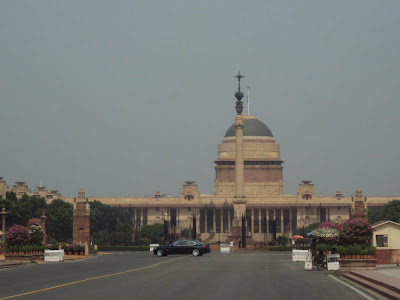 The India Gate, originally known as the All India War Memorial is situated on the other end of the Rajpath. This monument, designed by Lutyens, was built to commemorate the Indian soldiers under the British Raj who lost their lives in the 1st World war. After independence, it was converted to house the 'Amar Javan Jyothi' - the Tomb of the Unknown Soldier, where an eternal flame burns. The Gate is 42m tall and is a favourite open space in the city with families using it in the evenings & during holidays.
Posted by Sujith.G.S at 7/20/2011