The Timber Mills of Kallayi

The Kallayi village in Kozhikode, on the banks of the Kallayi river is famous for its timber mills. All along, numerous timber mills dot the banks of the river as far as the eye can see, with timber logs floating in the water to season. The river was used for transportation of the large logs of timber, especially from places upstream like Nilambur and the mills in Kallayi cut the logs to size. At a point in time, Kallayi was really famous on account of its timber trade and was said to be one of the largest places in Asia for the timber trade. It is even said that a lot of wood used in the construction of the Buckingham Palace was sourced from Kallayi.

'Kallayi gained its international fame fo its timber trade. Foreign traders, especially Arabs, Chineese & Japaneese came to Kozhikode mainly for the timber. Hundreds of timber mills sprouted up along the banks of the Kallayi river. The salty water of this river was believed to render extra strength to the timber. Logs that came from different places were left to stay in the water for several days. Huge cranes used to lift these logs were a common sight along the river bank.' - http://www.kallaipuzha.com/

Today, however, the timber business has scaled down dramatically, mainly as tree felling was strongly regulated to prevent deforestation. Thus, what remains today are a stock of buildings along the banks of the river in various states of decay. A lot of the tiled roofed structures are still functional, being used as godowns for bamboo and other timber products. The single storeyed and double storeyed mangalore tile roofed structures are densely packed along the bank and form a very interesting juxtaposition of roof forms. Narrow lanes, winding along the banks of the river are defined by these buildings. Mighty, old, sprawling, majestic trees line along the winding streets and create a strong play of light and shadow on account of the sunlight filtering in between the leaves, creating a perfect ambience along with the earthy tones of the tiled roofs. It was early morning when I took a walk along the narrow lanes adjacent to the present Kallayi bridge. The timber merchants were slowly starting their business for the day, although most of the godowns were not locked down at night. A few old labourers sauntered past, whose faces were almost as rugged and weathered as the old tree barks. It was almost as if they were from a separate world, a rustic world far removed from the polished manners of the city.
There is an inherent beauty in the old buildings here, although most of them were in various states of dilapidation. It is an architecture of inclined roof planes and forms as the main element of the superstructure, with walls being relegated to a porous enclosure alone. Roof planes define the volume inside, creates the scale, defines the edge of the street and creates a harmonious whole. There are beautiful details of balusters on balconies, cornice bands, brackets, rafters, jaalis. It is an architecture of earthiness – of wood and of earth.
﻿ ﻿
﻿ ﻿ ﻿ ﻿
﻿ ﻿ ﻿ ﻿ 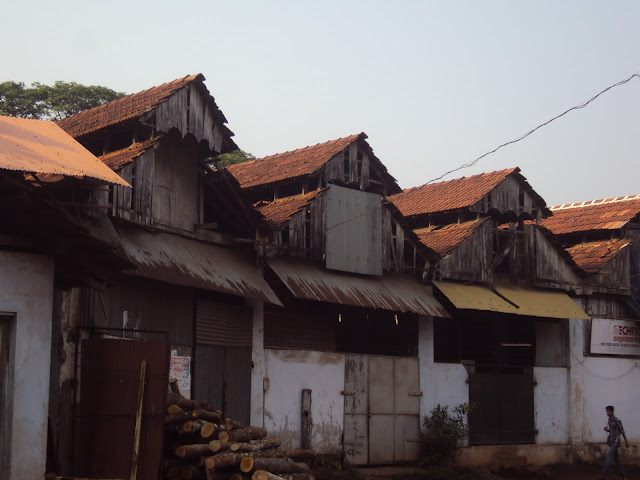 Email ThisBlogThis!Share to TwitterShare to FacebookShare to Pinterest
Labels: THE MALABAR SERIES