LOUIS KAHN’S SALK INSTITUTE OF BIOLOGICAL STUDIES
Set on a cliff overhanging the Pacific, Jonas Salk chose Louis Khan to translate his magnificent vision of a cutting edge research facility into reality. Jonas Salk wanted to create a research facility which was unique, different from the conventional designs; one which would inspire the creativity in the researchers.  He strongly believed that the architectural settings played a strong role in moulding the thoughts and actions of people.
To this end, Salk’s design brief to Kahn laid down the direction – a facility that will be adaptable to the changing needs of science; a facility that will need minimum maintenance and will weather gracefully; a facility with environments which meet the researcher’s functional and aesthetic needs. 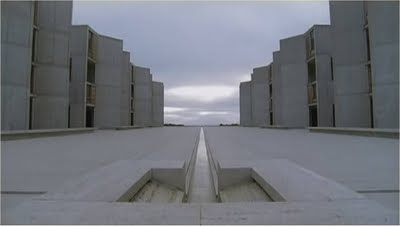 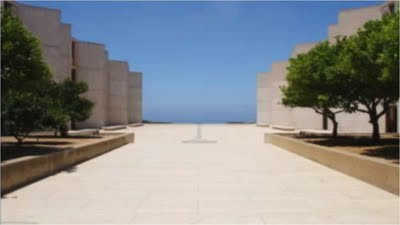 Kahn’s design addresses all these and more. The building materials are such that even after 50 years, there is timelessness about the building, with very little maintenance done. All the structures are scaled humanly to ensure maximum physical as well as psychological comfort. And the settings are inspiring enough that over the years it has given rise to over a dozen Nobel Prize winners and promoted cutting edge research in biomedical science.
The Salk institute is composed of 2 groups of buildings sited on the edge of a magnificent cliff, with the Pacific Ocean falling behind in the horizon. The 2 buildings are mirrored around an open plaza which forms a strong linear axis with the Pacific Ocean on one end and the entrance on the other, thus highlighting and framing the landscape rather than imposing itself on it. The plaza is stark, finished in travertine marble, without anything in it except a single small linear channel of water running down the centre. Yet, it is complete, the simplicity being highlighted by the magnificent backdrop of the sky and the ocean with the seagulls fluttering in the distance. 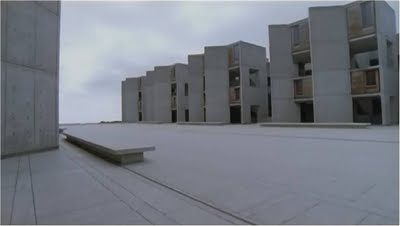 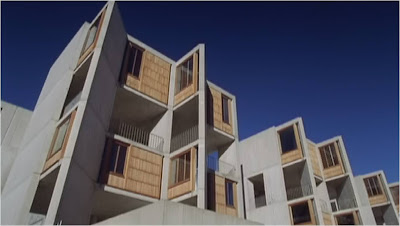 Robert Venturi & Dennis Scott Brown had this to say in "A Protest Concerning the Extension of the Salk Center," (Cambridge: MIT Press, 1996):

‘Our great American cities do not conform to the European urban ideal, where a whole is defined within confining borders and axial terminations, but acknowledge rather an order that is incomplete--fragmented--as it accommodates inherent expansion and progress toward eternal frontiers.
Louis Kahn designed the Salk Center in La Jolla...as an eloquent composition that is spatially and symbolically incomplete, with its two richly rhythmical buildings...[which] define a powerful axis that is open at each end and that constitutes thereby a significant gesture within an American landscape. The composition of this common space...is perceptually, physically, poignantly American as it frames the sea and the land where the old western frontier ends and the new eastern frontier begins.’


The buildings are 6 floors in height with 3 levels housing the laboratories while the other 3 houses the services and utilities. Thus, the design was flexible enough that the open laboratories could be reconfigured according to the researcher’s needs over time.
Kahn used concrete, teak, lead glass and steel as his material palette. Made in exposed concrete, the walls are unfinished showing clearly the shuttering marks and also the tie rod holes. The imperfections formed in the concrete surface during casting were left as such and were not covered up and finished, maintaining the integrity of the material. Moreover, this ensured that the maintenance required over time was reduced to the bare minimum. Similarly, the teak & steel were also left unfinished to weather naturally over time. 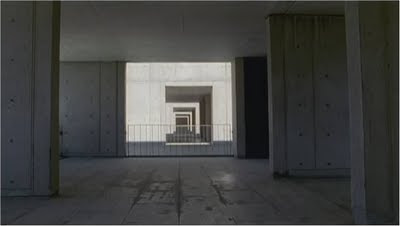 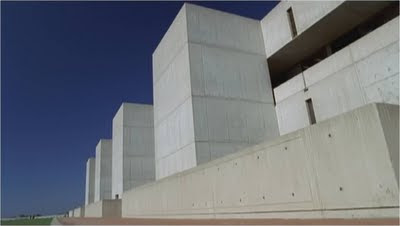 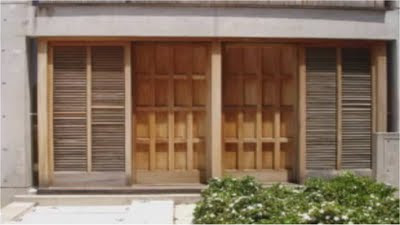 “Materials used are concrete, wood, marble and water. Concrete is left with exposed joints and form work markings. Teak and glass infill in the office and common room walls....The laboratories may be characterized as the architecture of air cleanliness and area adjustability. The architecture of the oak table and the rug is that of the studies.”
—Louis I. Kahn. from Heinz Ronner, with Sharad Jhaveri and Alessandro Vasella Louis I. Kahn: Complete Works 1935-74. p164.165. 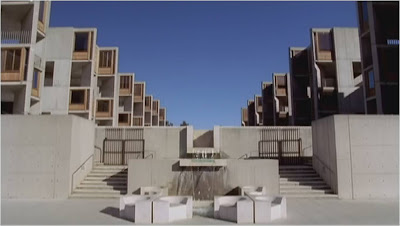 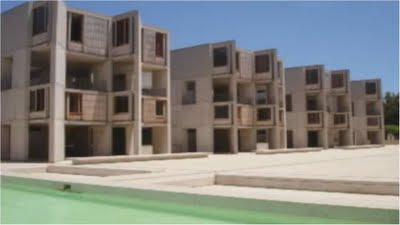 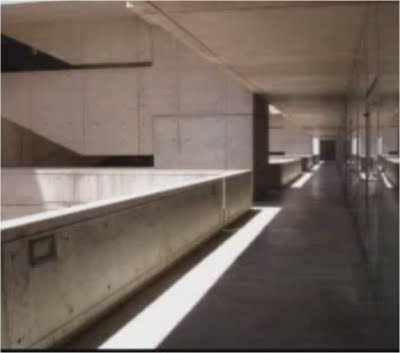 The labs are totally open spanning the total length of the building and each scientist has a study with an unobstructed view of the Pacific Ocean. An inspiring environment for scientific research is created by Kahn who has created spacious labs flooded with natural light. The scientists tell that not only is the building beautiful, but it is functional as well.
Louis Kahn was 65 when Salk was finished. For him, it was one of the first buildings which he was really satisfied with, a place which was really spiritual.
Posted by Sujith.G.S at 5/14/2011